You are here: Home / Uncategorized / Bacon-Wrapped Scallops
Share this article

Three words: bacon-wrapped scallops. I ask you, does it get any better than that?

Yes, it does, because those scallops were dabbed with butter. And served with a side of shrimp cocktail. Plus a caprese salad.

Yeah, OK, the dessert is not GAPS-friendly. But the rest of the dinner is — pretty much (just omit the cheese).

This was such an easy dinner. Not cheap, but easy and fast to prepare. And shellfish is so power-packed with nutrients — it's worth it to spend a little extra money to feed our family well.

1. Boil the shrimp in a little water until pink (a few minutes). Put under cold water and then set aside in fridge.
2. Fry up some bacon (I did it in a cast iron pan. Most recipes tell you to bake the bacon in the oven but I didn't want to waste all that good bacon fat.).
3. Drain the bacon on a paper towel and wrap it around the scallops and set them on a cookie sheet.
4. Bake for 10 minutes at 400 degrees.
5. Sprinkle the scallops with sea salt before serving.
6. Serve the shrimp with cocktail sauce (I got some ready-made from Whole Foods — no additives, sweetened with honey).

I made the cookie dough yesterday — it's in the fridge so all I had to do was pull it out and bake it. 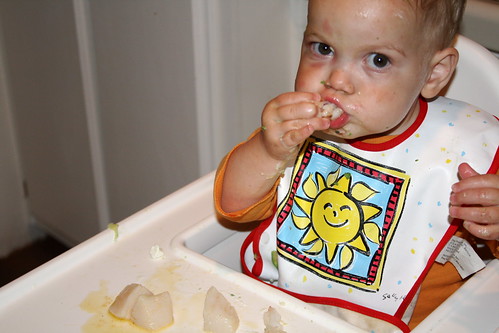 She devoured every last bite.