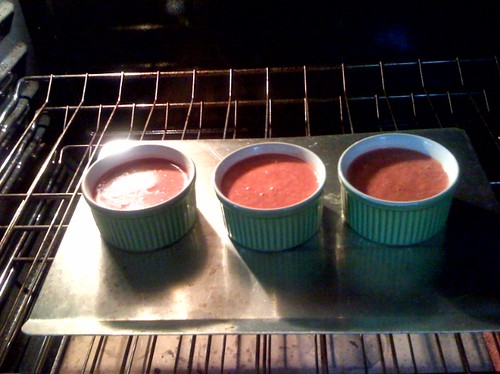 It was a busy day in the kitchen. I made lacto-fermented salsa, lacto-fermented ketchup, chicken stock, a brisket and carrot soup (for dinner), and chicken liver mousse (which we also ended up eating for dinner).

I used the recipe from the Balthazar cookbook for the chicken liver mousse. If you're not familiar with it, Balthazar is a restaurant in New York City. In SoHo. It's a fun place to go. And the food is very good.

Anyway, this is a good recipe. The mousse came out great. In the restaurant, they add a little foie gras. But I honestly don't think you need it. This was so good, even Seth ate it.

It would have been better if we could have put it on bread. But it was still good.

Yes, it has butter in it. We're trying butter to see how he does. He's doing fine so far.

I know, you're supposed to start with clarified butter but he wanted to try. Seth knows himself pretty well and he keeps saying, “I'm fine with butter.”

1. Preheat the oven to 300 degrees F.
2. Brush 6 4-oz ramekins with the 4 TBS melted butter.
3. Use a small knife to remove the connective veins from the chicken livers and discard the veins.
4. Process the chicken livers, egg, sea salt, quatre-epices, pepper, and Cognac in a food processor. (I left out the Cognac, since I wanted to feed this to Kate. I didn't have any white pepper so I used black pepper instead. And I used freshly grated nutmeg, only because I happen to have whole nutmegs and a nutmeg grater.)
5. With the food processor running, slowly add the 1/2 pound of melted butter. Blend for 15 seconds.
6. Pour the mixture into the ramekins, filling 3/4 of the way.
7. Set the ramekins in a baking dish and fill the baking dish with water to half the height of the ramekins.
8. Bake for 30 minutes.
9. Let the ramekins cool, and then refrigerate until needed.
10. Run a warm knife around the edge of each ramekin, cover with a plate, and invert.
11. Serve chilled (we ate it room temp) with baguette toasts.

So yeah, we ate it without the baguette. No Cognac either. Still so good. Kate loved it, too.

I forgot to put the ramekins in the water bath (see the photo above). But it still came out great.

The salsa came out really good, as well. I didn't think to use gloves when I was cutting up the chili peppers for the salsa — and I burned the shit out of my hands. They were on fire — for hours. It would not go away. I tried fresh aloe vera and it helped for about 5 minutes but the pain came right back.

I looked online for remedies — and I tried several to no avail. Soaking in vinegar, dishwashing liquid and cold water, olive oil… nothing worked. Then I tried waterless hand sanitizer — it's ethyl alcohol.