This recipe for coconut oil latkes (potato pancakes) is from Bubbe, Kate's grandmother. It's an everyday food at Jewish delis (I love it with my salami and eggs) but it's also a traditional for Hanukkah.

Hanukkah, also called the Festival of Lights, is an eight-day Jewish holiday. This year it begins on December 1st this year. I'm excited because we are flying to New York to see Bubbe and Papa for Bubbe's 70th birthday party. For the first time, we get to celebrate Hanukkah with Bubbe and Papa.

Hanukkah includes the custom of eating foods fried or baked in oil, as the original miracle of the Hanukkah menorah involved the discovery of a small flask of pure olive oil. This small batch of olive oil was only supposed to last one day, and instead it lasted eight. Potato pancakes, known as latkes in Yiddish, are traditionally associated with Hanukkah, especially among Ashkenazi families, as they are fried in oil. 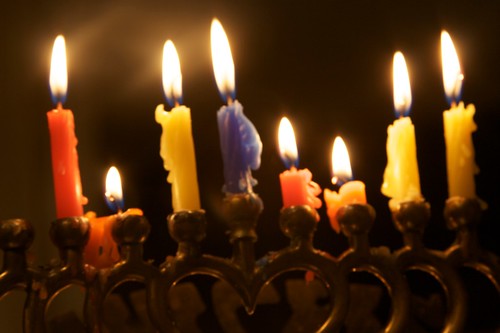 1. Peel the potatoes, then shred them using a box grater or using your food processor.
2. Using cheesecloth or a thin dish cloth, wring the potatoes hard over the sink, extracting as much moisture as possible.
3. Add the shredded potatoes to a large mixing bowl (or two bowls, if necessary). Mix in the onion, eggs, sprouted flour and salt.
4. Add a few turns of freshly ground black pepper and combine thoroughly.
5. Heat the coconut oil in a large cast iron or enamelware skillet or Dutch oven. You can use a thermometer to test the temperature. I did not find it necessary but you may want to for precision. Heat the oil to about 300-340
degrees, or, if not using a thermometer, until you toss in a bit of batter and you get lots of tiny bubbles.
6. When the oil is hot enough, carefully place generous tablespoonfulls of the potato mixture into the skillet. Press down on them slightly to form 1/4 to 1/2 inch patties.
7. Fry on each side until cooked through and golden brown.
8. Drain on paper towels. Set aside or in the fridge and warm in the oven just before serving.
9. Serve warm with sour cream and apple sauce.