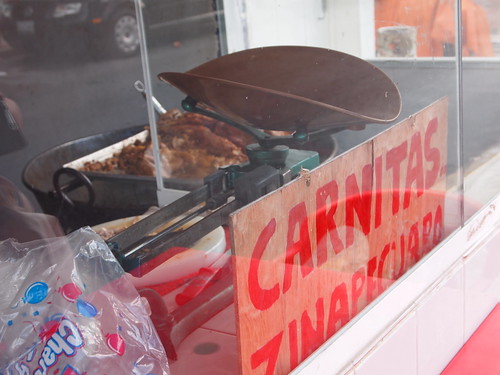 It wasn't until I moved to Southern California that I discovered pork carnitas. And what a discovery — they are outrageously good. Unfortunately, restaurant carnitas are typically cooked in water or canola or soybean oil.

Traditionally, carnitas are cooked in lard. Lard is a very healthy fat. It's one of the very best sources of vitamin D (second only to cod liver oil). Want to know more reasons lard is so good for you? Check out the benefits of eating lard and how to render it yourself at home.

I was shocked at how much lard this recipe calls for, and yes, you really do use that much. And man, are they delicious!

It is so easy to make this in a crockpot. You can let it go all day (set to low heat instead of medium).

And yes, this recipe is GAPS-legal! If you're doing the GAPS or SCD diet or you are on a grain-free diet, just eat these carnitas without the tortillas. Just put them on a plate with some extra guacamole and lacto-fermented salsa and you are good to go.

When it comes to lard, I cannot stress this enough. When switching to using lard, please do not buy the stuff from the supermarket — it is not only full of artificial hormones, but it also partially hydrogenated to extend shelf life. Yuck!

Coconut oil is a stable fat and makes a fine substitute if you do not have a good source for pastured lard.
I have successfully used leftover bacon grease as well. (Finally! A great use for all this leftover bacon grease!) I typically reuse the bacon grease at least 2 or 3 times when making carnitas. Just strain it after each use and store it in mason jars or other containers in the fridge.

I have made these carnitas with and without the orange slices and the cilantro. If you can't find these ingredients, go ahead and make the carnitas anyway. Trust me, they will still come out fantastic.

1. Place the lard in a Dutch oven or crockpot and set the heat to medium-low.
2. Cut the orange into slices. Add to pot.
3. Coarsely chop 1/4 of a cup of cilantro. Add to pot.
4. Cut the pork into 3-inch cubes and lightly salt the meat with sea salt.
5. Once the lard has melted, add the meat to the pot. The melted lard should cover the meat; if it does not, add more.
6. Cook on medium-to-low heat for 2 to 2 1/2 hours. After about 30 minutes, the lard will begin to boil. Allow to boil gently. As the moisture gradually cooks away, the temperature of the lard will rise, allowing the meat to brown. If the meat has not browned at the end of the cooking time, remove the orange slices and continue to cook.
7. Make the guacamole: Mince the garlic and juice the lemon or lime. Mash the avocados together with the garlic, lemon or lime juice, sea salt and black pepper to taste.
8. Remove the meat and let drain on paper towels.
9. Serve with optional warm sprouted flour or corn tortillas. Top with the guacamole and sour cream.
10. Garnish with salsa, chopped onion, cilantro, and jalapeno slices, if desired.

64 thoughts on “Crockpot Pork Carnitas with Guacamole and Sour Cream”