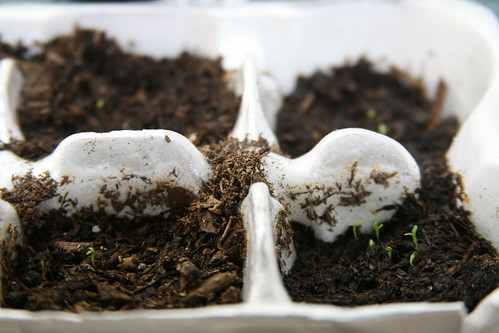 I was gathering Italian parsley and oregano for my spaghetti sauce tonight, and I was thinking, “There isn't anything better than this. Being able to just step outside and gather herbs for your dinner.”

Then I realized there is one thing that is better. And that's the first seedlings of spring.

I was so excited to find these seedlings this afternoon. I actually jumped for joy. They are baby chamomile plants. I love chamomile tea, so I figured I'd grow my own. It's also great to plant chamomile around the garden, in between other plants.

Amazingly, I only planted these seeds less than a week ago. It was last Sunday — on Kate's birthday.

Here's my set up: 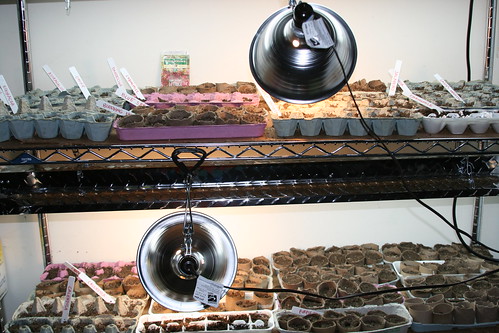 I got some stainless steel shelves from the restaurant supply store (I figure I'll use them in the kitchen or pantry later). I'm using shop lights with fluorescent bulbs and the lamps on the sides are for warmth. And I have everything hooked up to a timer so they get light 14 hours per day.

Those are egg crates. In the ones that are flat, I used cut-up cardboard rolls from toilet paper and paper towels.

I planted lots of seeds — including a few different kinds of tomatoes, basil (for sandwiches, pesto, tomato sauce, and lots of other things), nettles, dandelion, jalapeno (for my salsa), bell peppers, a few different kinds of lettuce, hosta and impatiens (for the shade garden), and something called blue shrimp plant. There's a whole lot more — can't remember off the top of my head.

This is so much fun. The best thing is — the fun doesn't have to stop. I can't keep planing all summer. I think I'm going to order some more seeds.

Heck, I live in Southern California. I can plant all year long.

I'm going to plant a bunch of other stuff directly in the garden this weekend. Watermelons, various kinds of flowers — including sweet pea and lavender. I forget what else.

4 thoughts on “First Seedlings of Spring”

link to It's Moving Day!

Hi everyone, I wanted to start by telling you how much I appreciate you for supporting me on Patreon. As I always say, I don't do anything until God tells me to take action. A week ago, at the Clay...

Continue Reading
link to New Video: What It's Like Trying To Wake Up Normies