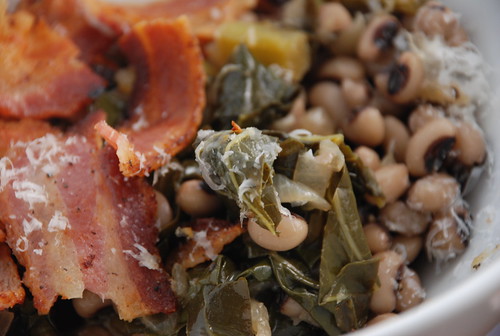 Hoppin' John, the classic meal to serve on New Year's Day, is a soul dish that has African, Caribbean, and French roots. While eating black eyed peas for good luck in the new year is a tradition with roots from the American South, the custom actually goes all the way back to the Babylonians.

Part of the tradition is that a shiny coin is buried among the black-eyed peas before serving. It is said that the person who finds the coin in their bowl is ensured good luck throughout the following year.

“The peas, since they swell when cooked, symbolize prosperity; the greens symbolize money; the pork, because pigs root forward when foraging, represents positive motion… The peas are symbolic of pennies or coins.”

Accompaniments to Hoppin' John are stewed collard greens or other soul food greens such as mustard greens, turnip greens, chard, or kale. (Remember that while it is important to include lots of raw foods in your diet for enzymes and other benefits, foods like kale and spinach should be cooked in order to minimize anti-nutrients.)

Since Hoppin' John is traditionally from the American South, why not use lard to cook the ingredients in if you have some on hand?

Lard is a healthy fat that is full of vitamin D if the pigs were on pasture. It's a good source of mono-unsaturated (47-50% of the fat) and saturated fats (38-43%). Lard has been consumed by people around the world for thousands of years (for example, Mexico and other Latin American countries, as well as China and Spain, and Okinawa).

Note: Don't buy hydrogenated lard — the stuff you see at the store. Find a farmer who sells pig fat and learn how to render lard at home. It's easy!

When to Eat Hoppin' John

While it is often consumed as the first meal on New Year's Day, I regularly eat Hoppin' John for brunch or lunch. If you like, you can eat it for dinner too.

1. Place the black-eyed peas in a stock pot or Dutch oven. Cover with warm water, cover with lid, set in a warm place, and soak for 12-24 hours.
2. Drain and rinse the black-eyed peas in a colander. Set aside.
3. Fry bacon in a skillet. When cooked through, transfer bacon to a cutting board and chop. Reserve the bacon grease for later (you'll need it for the collard greens).
4. Heat butter or lard in stockpot.
5. Chop onion, celery, green pepper, and garlic. Add to stockpot and cook for 4 minutes.
6. Add the black-eyed peas, stock, bay leaf, bacon, and thyme.
7. Bring to a boil, reduce the heat and simmer on low heat for 45 minutes to a few hours. You can also do this in the crock pot all day on low heat. If the liquid evaporates, add more chicken stock.
8. Up to a couple of hours before you are ready to eat, cook the brown rice in a rice cooker according to instructions (or follow instructions for cooking brown rice in Sally Fallon's Nourishing Traditions). Keep warm until the black-eyed peas are ready..
9. Add sea salt, black pepper and cayenne to the black-eyed peas to taste.
10. Serve over rice, with collard greens on the side.

Photo credit: hoppin' john to start the new year by kthread, on Flickr