I know people are going to complain when they see the photo of the pig's head. The last time I posted a photo of offal (I believe it was the cow tongue), I got a lot of complaints. (Rest assured, I refrained from posting the more gory close-up shots. Go to my Flickr account if you want to see those.)

I think we have become too sanitized and sheltered in America. Pigs have heads. Cows have tongues. And they are meant to be eaten. Go to France and you will see all the skinned rabbits hanging in the shop windows. Or Spain, where there are pig's legs hanging from the ceiling in many restaurants. We Americans want our cheese shrink-wrapped and our chickens cut into skinless, boneless breasts.

It is ridiculous that most people will only eat the muscle meat from animals. It's not sustainable. How can it be? Just eating a few select parts of the animal and throwing the rest away?

Furthermore, organ meats have 10 to 100 times the nutrients of muscle meats, according to Sally Fallon Morell, author of the Nourishing Traditions cookbook and Founder and President of the Weston A. Price Foundation.

How to Cook a Pig's Head

What would you do with a pig's head? My WAPF co-chapter leader, Victoria, got her hands on one from Healthy Family Farms (a sustainable family farm here in the Los Angeles area, where I buy our eggs, chickens, and ducks).

We decided to make head cheese. We followed the recipe from Chef Fergus Henderson's cookbook, The Whole Beast: Nose to Tail Eating

My neighbor and dear friend Janis and I had just attended a cooking course with Chef Fergus Henderson the weekend before, where we got to eat delicious crispy fried pig's ears, pig's tails, cow's heart, and trotter salad. Stay tuned for that post coming soon.

Victoria and Janis did most of the work, while I took pictures and chased after my rambunctious preschooler. Here she is, drawing, in a rare moment of placidness:

Head cheese is surprisingly easy to make. If you don't mind ripping the flesh off the boiled head of a pig, that is.

Janis's husband, David and I didn't mind at all — we happily nibbled on it. It was delicious!

Here's David taking photos of the pig's head (I have to say, I really enjoyed his enthusiasm for this way of eating): 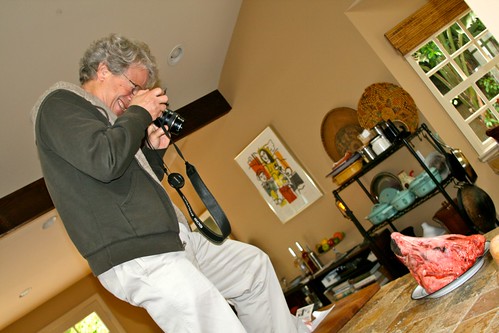 Anyway, to make head cheese, you boil the head of a pig for several hours — just like you'd make beef or chicken stock. After some time, you remove the head, then you pick off all the meat. The meat goes into a loaf pan some such vessel, and the skull goes back into the pot.

When the broth has cooked long enough, you remove the skull and pour the gelatinous broth over the meat bits in the loaf pan. This will gel and create the potted meat dish, “head cheese”.

You can get the complete recipe in Fergus Henderson's book: The Whole Beast: Nose to Tail Eating

Unfortunately, I did not get a chance to taste the head cheese, since I had to leave to put my little one down. I'll have to get my hands on another pig's head and make it again.

Enjoying the Fruits of Our Labor

Here we are, relaxing with a glass of wine and a dinner of delicious mussels made by Janis: