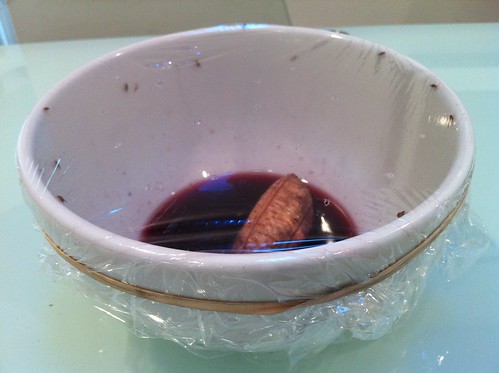 Fruit flies are really annoying and seemingly impossible to get rid of. However, it’s very easy to make a fruit fly trap to catch them.

Last week I realized I forgot to put a rubber band around my kombucha in my cupboard. Suddenly I had all these fruit flies in my kitchen.

I saw all kinds of different methods online for catching fruit flies, and most of them seemed confusing to me — and/or messy.

This is so simple — and it really works to catch fruit flies.

How to Make a Fruit Fly Trap

1. Get out a bowl.
2. Put some wine or vinegar in the bowl, with some old fruit (I used red wine and a banana).
3. Put a piece of plastic wrap over the bowl and secure it tightly with a rubber band.
4. Use the tip of a skewer or something long and pointy and poke a bunch of holes in the plastic wrap.
5. Place the bowl in the place in your kitchen where you see most of the fruit flies (and make sure you clean up whatever it was they were attracted to in the first place).

The fruit flies will be attracted to the fruit and wine — and they’ll check in but they won’t check out. I don’t know why, but they can’t fly back through the holes.

22 thoughts on “How to Make a Fruit Fly Trap”