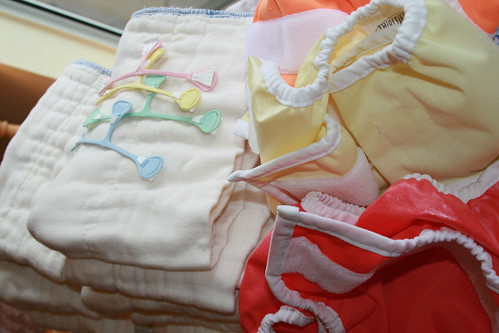 This morning I was listening to the news about all the recent layoffs. I can't stop thinking about all the people out there who are sitting at their kitchen tables right now, wondering what they are going to do next.

During these tough times, every cent we save matters. We are all looking for ways to cut back. So I'm going to be writing a series of tips on how to cut costs. I pray that these tips will help a few people out there.

One of the best ways a family can cut back on spending is to switch from disposable diapers to cloth. I ran the numbers when my daughter was 6 months old, and I was stunned at the savings.

By switching to cloth diapers and wipes instead of disposables, you can save over $50 per month — which adds up to over $1,500 over 2 1/2 years.

I'm basing these numbers on the cheapest diapers I could find: Huggies diapers and wipes at Costco. Did you know that a diaper costs anywhere from .20 to .25 each? That's a lot of money for something that's just going to be thrown away. Especially when a child goes through 7-15 diapers per day (depending on the age).

Take a look at these spreadsheets. Here are the costs for using disposable diapers and wipes:

And here are the savings when you switch to cloth:

Here is what I spent on all the stuff I needed to switch to cloth diapers:

I got Chinese prefolds, which are the most economical option. I also bought Thirstees covers, doublers (for overnight), and Snappis (fasteners that are a lot easier to use than pins).

For wipes, I cut up an old sheet using some pinking shears. No sewing required! I wash and dry them and keep them in a wipes warmer. I also keep a plastic bottle of water with a little Dr. Bronner's liquid soap at the changing table. You just squirt a little onto the cloth wipe for each change. Then the wipe gets tossed in the wash with the dirty dipes.

I even bought a fancy sprayer thing that attaches to your toilet. I don't use a diaper pail. I just rinse the diapers in the toilet with the sprayer, add a little baking soda and vinegar and use the washer as a wet pail. Then I spin it out at the end of each day, and I do wash 2-3 times per week.

Here are the average costs for doing a load of diapers 2-3 times per week (I based this on the national average):

I make my own detergent with Borax, baking soda and a bar of soap — it's super cheap (like 3-5 cents per ounce). If you want you can buy natural detergent (you can't use conventional detergent on diapers — they get a build up and smell like ammonia) but it's a lot more expensive. I'll post my recipe for homemade detergent soon.

Even if you don't make your own detergent (it's so easy but I can understand why you wouldn't want to bother with it), you'll still save a ton of money switching to cloth. Since I figured I was saving over $1000, I went out and bought myself a new Canon Rebel digital camera, which I use now for this blog — so of course, it's tax-deductible. 🙂

Oh, and guess what? All my cloth diapers and supplies are now tax deductible, too, seeing how I'm writing about them. Gosh, I love blogging. And I love my accountant.

If you have any tips for cloth diapers, please post them in the comments. You never know who you might be helping.

And for those of you out there who have questions about cloth diapering, please post below.