OK seriously, this is the most beautiful thing that has ever come out of my kitchen. Real sourdough bread, fermented for almost 24 hours. The perfect combination of delicious and digestible. And one of the very best vehicles for pastured butter. 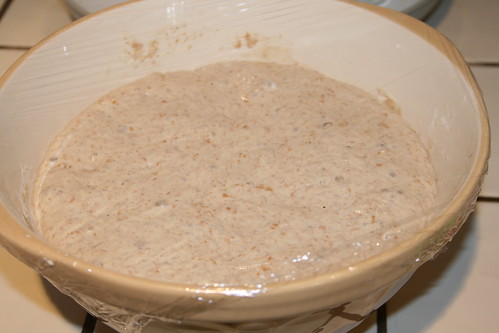 We ate some tonight, fresh out of the oven, slathered with grass-fed butter, along with some homemade clam chowder.

(Chowder review from toddler: “Yummy soup!” She ate almost the whole bowl of chowder. I'm thrilled since clams are super nutrient dense — very high in vitamin B12, zinc and iron. Clams are actually the world's best source of iron — they have 9 times more iron in clams than beef.)

My most heartfelt thanks go out to a reader and now dear friend (who also happens to be a neighbor — lucky me!) who was kind enough to let me come me over yesterday. She taught me how to make this no knead sourdough bread step by step. She's obviously spent a lot of time making sourdough bread (I think she said she's been doing it for about five years).

It does have white flour — it's what Sally Fallon Morell would call a “compromise bread”. But it does use part sprouted flour. And the fact that it is fermented using sourdough (and not made with commercial yeast) means it is infinitely more digestible. I don't know about you but every time I eat white flour that has not been fermented with sourdough, I end up feeling bloated and constipated.

I'm so happy I can finally make sourdough bread — and it is so unbelievably easy. It hardly takes any effort at all. No kneading, no stress. Just mix together and let it ferment.

And the results were — well, magnificent. The loaf was crusty on the outside, soft and chewy on the inside, and full of big holes like a loaf of bread should be. French baguettes are judged by the size of the holes.

PS: Oh, and next week, she's teaching me to make sourdough pizza dough!