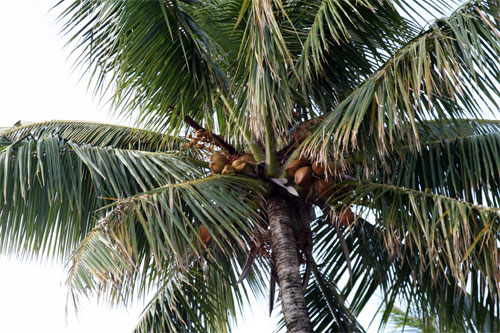 Seth and I took a quick trip in December — our first real adult romantic vacation (ahem — no kids) since before toddler Kate was conceived. We went to Maui, Hawaii for 4 nights.

It was lovely. And I mean fabulously, decadently lovely. You know how when you really neeeeed a vacation, it's so much better?

But Hawaii is wonderful and fabulous no matter what. This was only my second time to visit, but both times were absolutely amazing.

I know you want to hear about the food and I promise, it's coming. I have a luscious post coming any day now that is ALL about the food! With lots of pictures!

But first I gotta give you the background (I couldn't fit it all in one post so I broke it into part one and part two).

Going to Hawaii in December is the perfect time (if you manage to miss the rain, which we did). The weather is idyllic. And this is coming from someone from Los Angeles, where the weather is already pretty darn idyllic.

The first day of whale watching is December 15, so if you go to Hawaii in wintertime, you're more likely to see whales. We didn't see any but we did not actually go whale watching. I talked to some people who did out whale watching go and they said they saw lots of whales.

We stayed at the Four Seasons in Maui. I loved this hotel. It was so nice to be pampered after practically three years of child rearing.

Here's the pool (can you say SALT WATER POOL?): 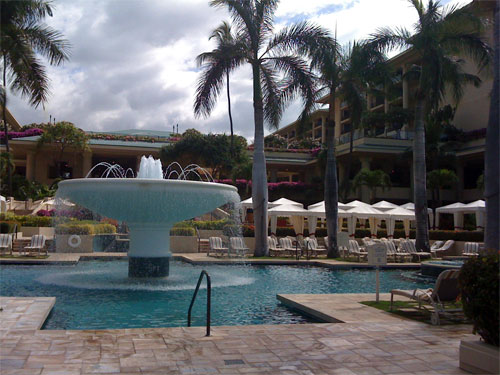 Here are the cabanas where we lounged, read (I was finishing Nina Planck's new book, Real Food for Mother & Baby), drank Mai Tais, and played word games on our iPhones: 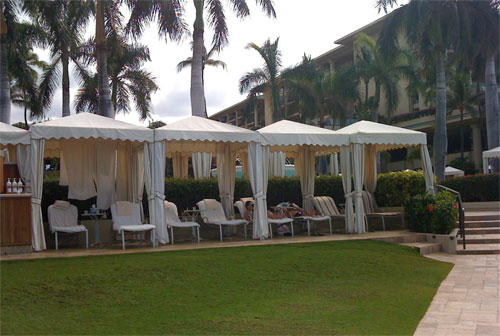 And here's the beach, just steps away from the pool: 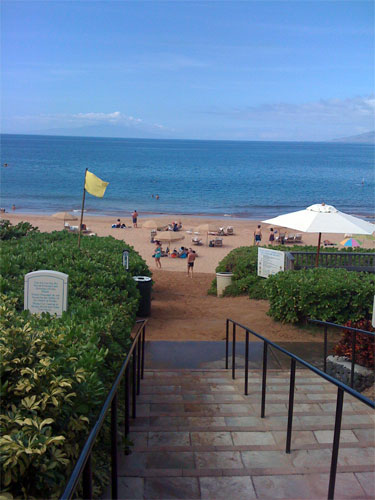 Here I am eating breakfast. Look how happy I am! A resort in Hawaii will do that to you. Not to mention the FOOD (you'll see it in my next post). 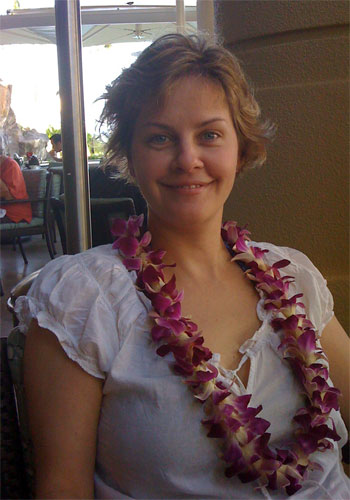 The first day we were there, we just sat around by the pool. So relaxing! The second day, we decided to get out and do something fun (since we only had 4 nights in Hawaii). So we went snorkeling. 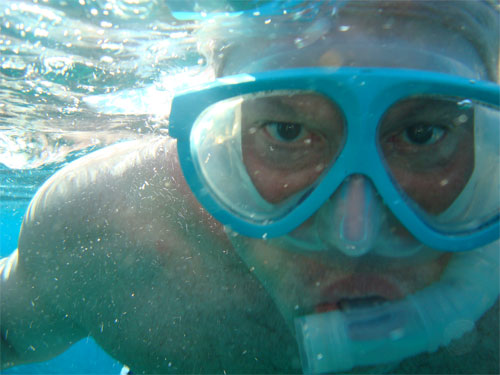 The water was warm and the sun was shining. It was gorgeous out!

We rented a camera to take pictures of the fish. I had barely gotten my flippers and mask on and gotten in the water. I was just testing out the camera when I took this photo: 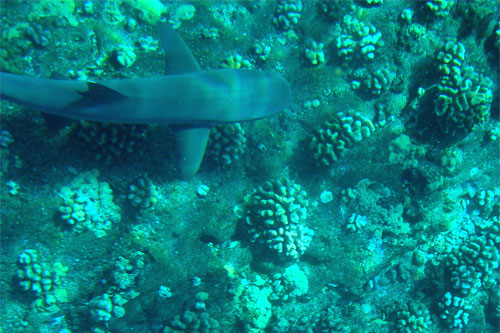 Um, that's a shark, right? Look at the dorsal fin! It's gotta be!

Perhaps a baby shark — but a shark nonetheless… I'm pretty sure anyway. I kind of denied it at the time. I was scared out of my mind but I didn't want to admit it. If I admitted that there were sharks in the water — I would have had to get out immediately.

I ended up snorkeling for 3 hours or so. I couldn't believe how fast the time flew. It was so beautiful, just looking at all the fish. Thankfully, I didn't see any more sharks.

Here I am driving the boat: 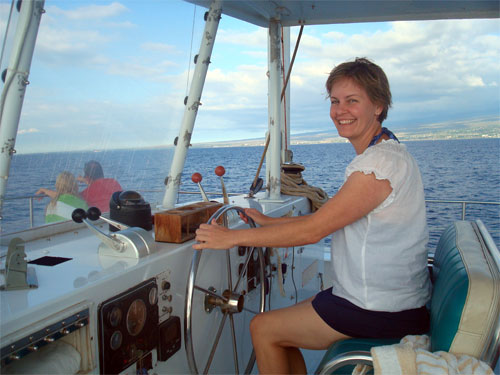 The next day, we drove in our rented convertible from Wailea all the way around the island. It took all day. We listened to local Hawaiian music on the radio the whole time. Hawaiian radio is not all corporate — so you hear all these independent musicians playing local Hawaiian music — it's really neat. 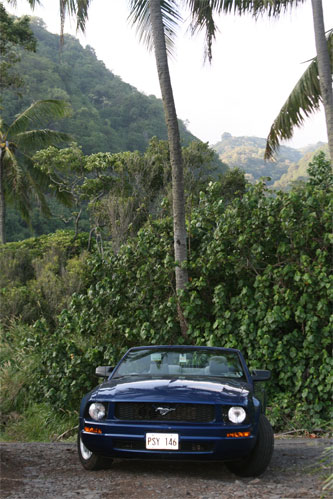 We stopped along the way to feed some birds and look at the scenery: 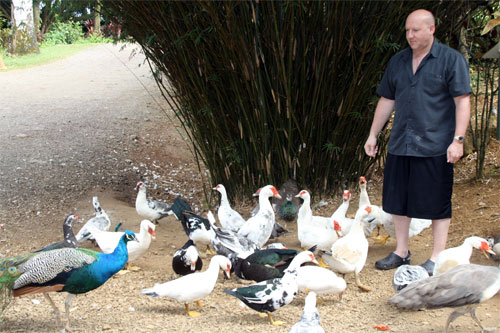 I had on a tank top and I didn't wear a hat or a jacket — or any sunscreen — on our drive. I did make sure to take my cod liver oil. In fact, my in-laws were reminding us as we were packing our suitcases — “Don't forget the cod liver oil!”

My in-laws became true believers in cod liver oil last year. They went to Costa Rica and said they didn't burn at all — said the only change they had made in their diet was taking cod liver oil.

I don't know why this works, taking cod liver oil, but it really does. I got sun, a nice pink rosy glow — but I did not burn at all. It's so wonderful not to have to slather on sunscreen! 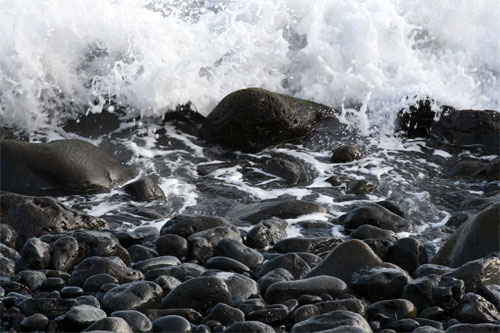 Hawaiians eat more fish than any other state in the nation. At least that's what they claim in their promotional travel brochures. I can believe it though. Seafood dominated every menu at every restaurant.

Those of you who read my blog regularly know that I am a big fan of eating fish. It was Dr. Weston Price and Sally Fallon who first clued me in to how important seafood is for good health. Nina Planck drove it home with her book Real Food.

I've always loved seafood — but only after I found out how good it is for me did I start working to incorporate it in my daily diet. And in Hawaii, it's so easy. We ate fish twice, sometimes three times a day.

I have so much more to say about the food in Hawaii. A whole post's worth.

Stay tuned — the next post about the fabulous food we ate is coming any day now!

This post is part of Real Food Wednesday on Kelly the Kitchen Kop.

33 thoughts on “Our Hawaii Vacation – Part One”