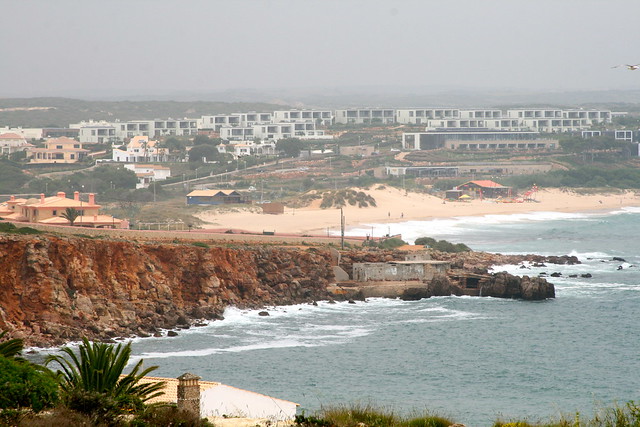 We left the Southern Coast of Portugal after breakfast, making our way to Spain…

It was a pleasant drive in our rental car from the Algarve. We listened to the [easyazon-link asin=”1451648537″ locale=”us”]Steve Jobs[/easyazon-link] audiobook (absolutely amazing — I highly recommend).

When we arrived in Sevilla in the afternoon, the sun was shining and bougainvillea was blooming everywhere. Is there anything better than a day in Spain in May? I couldn't think of a single thing.

Words cannot express how much Seth and I loved Sevilla. It is one of the most beautiful cities I have ever seen. I think I even liked it better than Barcelona (although Barcelona is amazing). 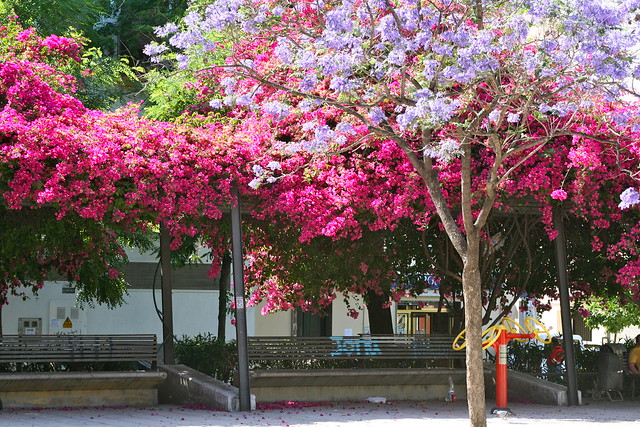 After we checked into the hotel, we walked to the nearest tapas bar, about a block away, for an afternoon snack. In Spain, the restaurants and bars all close around 4:30 or 5 pm and they don't open back up again until 9 or 10 pm, which is when they eat dinner (they have siesta in the late afternoon until 9 or 10 pm).

We had missed lunch, and we needed a snack to tide us over until dinnertime.

You know you're officially in Spain when you see this: 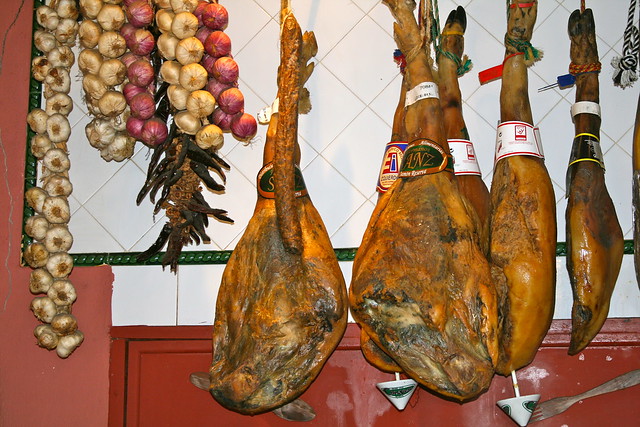 Cured pig's legs hanging from the ceiling of every restaurant and tapas bar. 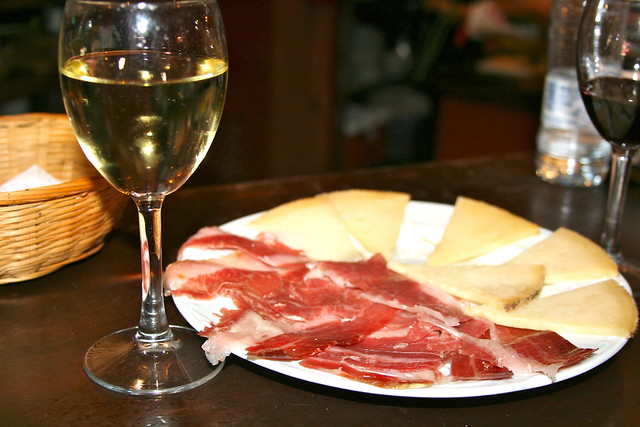 We ordered some jamon (Spanish ham, which they sliced from one of the pig's legs from the ceiling) and Manchego cheese (local Spanish cheese). And we had some local wine — Seth had a Rijoa and I had a glass of Spanish white — very refreshing on a hot day.

After our snack, we went back to the hotel for our siesta (aaaaahhhhhhh… air conditioning, cable TV, and wifi).

We checked our email for the daily iPhone photo updates from Kate's grandparents (Bubbe & Papa) back on Long Island: 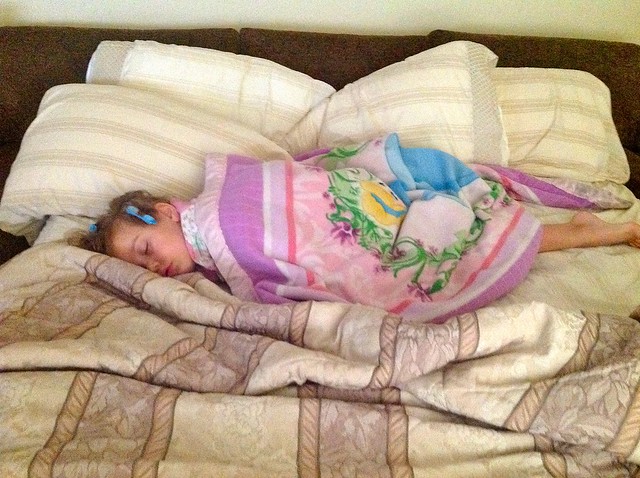 How sweet is that? Kate sleeping in Bubbe and Papa's guest bed wearing her curlers. Still sleeping breech, which is the way she was in the womb. 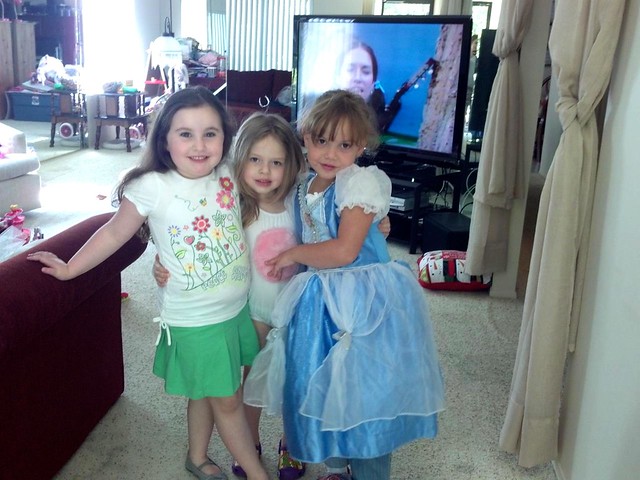 Here she is on a playdate playing princess dress-up with the neighbor kids.

After our siesta, we walked over to a different tapas bar, Las Golondrinas.

Trendy, young, hip, and the food was great. 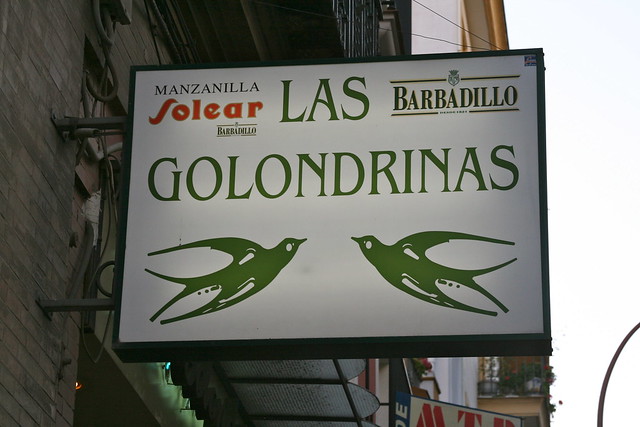 We started with a couple of glasses of wine and the most amazing radishes, with a little olive oil and sea salt. 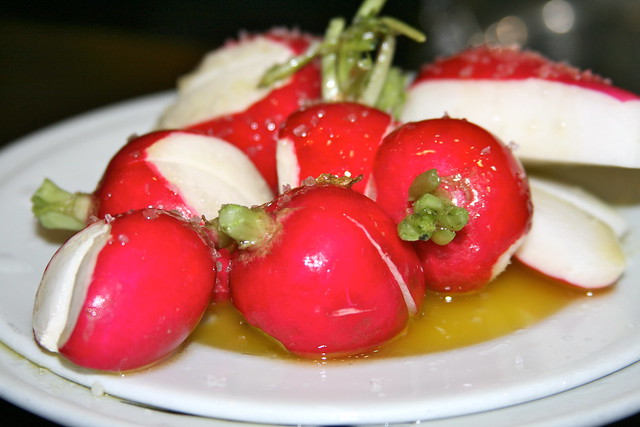 Next we had anchovies with roasted red peppers on toast. 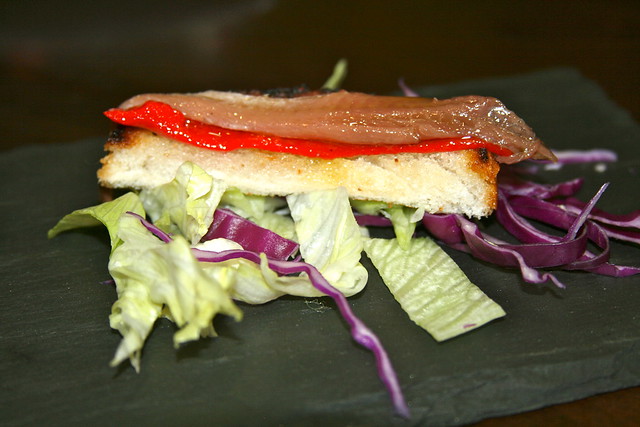 Next, pork with potato chips. 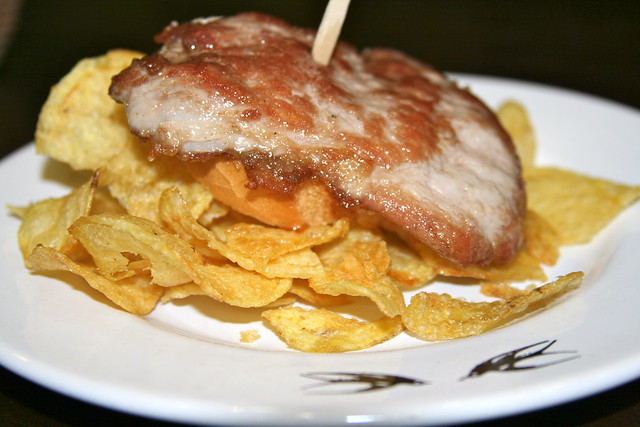 Then we ambled over to what would become one of our favorite (if not the absolute favorite) tapas bar in Sevilla, Sol y Sombra. 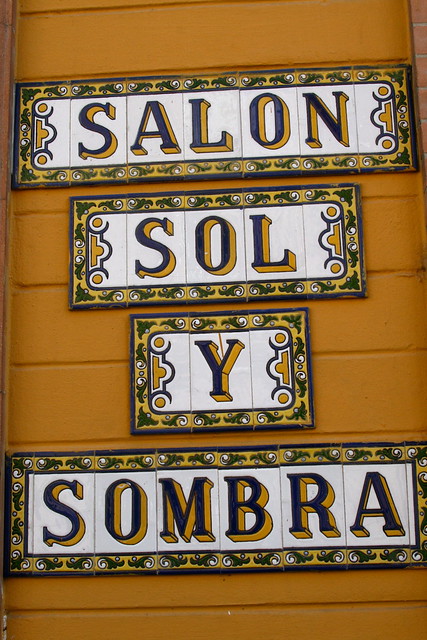 It was just a couple blocks away from our hotel. It had such a homey feeling — like a pub in England. Tapas bars really are the equivalent of the neighborhood British pub. 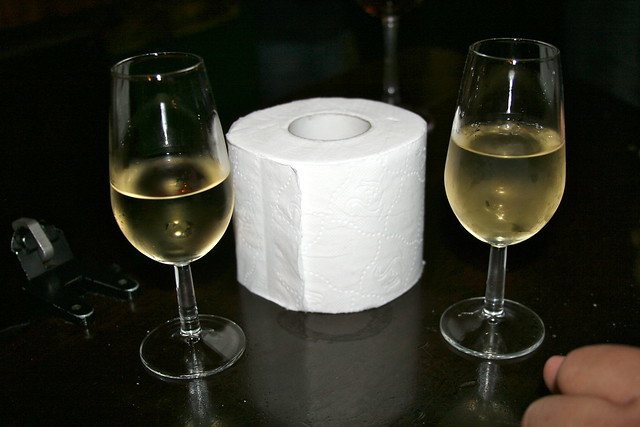 We don't have anything like this in America — except Starbucks. But in my opinion, Starbucks is what's wrong with America. They are cookie-cutter places with no local feel. You don't head over to the Starbucks to hang out with your neighbors and shoot the breeze and enjoy the local cuisine.

Don't get me wrong — I like coffee and I have nothing against Starbucks inherently. It's just sad to me that here in America we don't have “public houses” like they do in other countries where you can just hang out, meet up with your mates, and enjoy traditional food and drink. 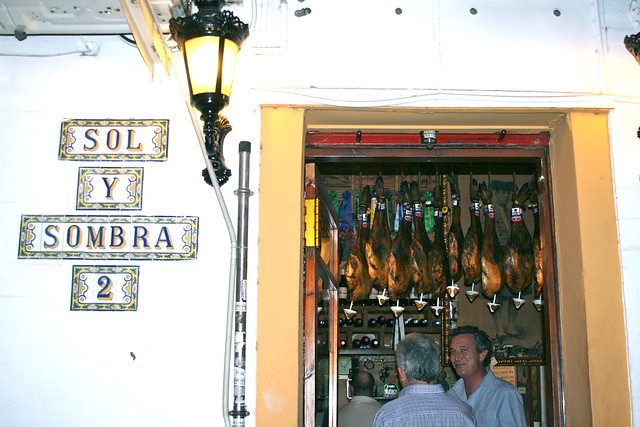 At Sol y Sombra, there are posters all over the walls promoting bullfights. 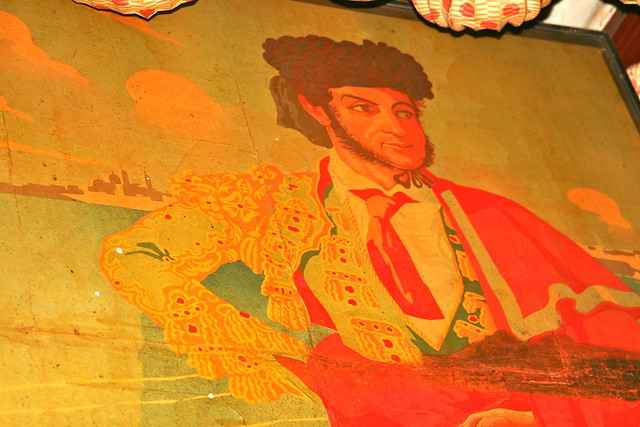 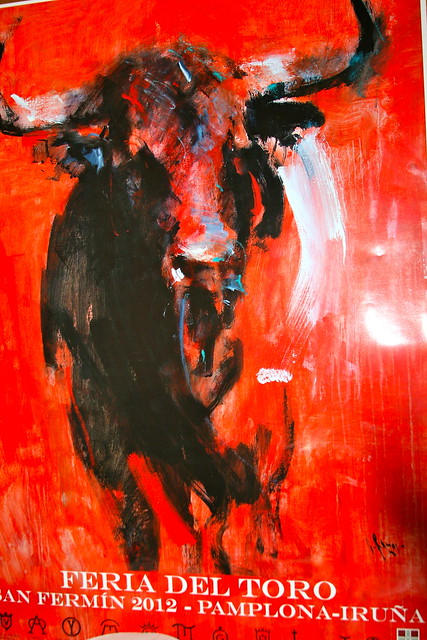 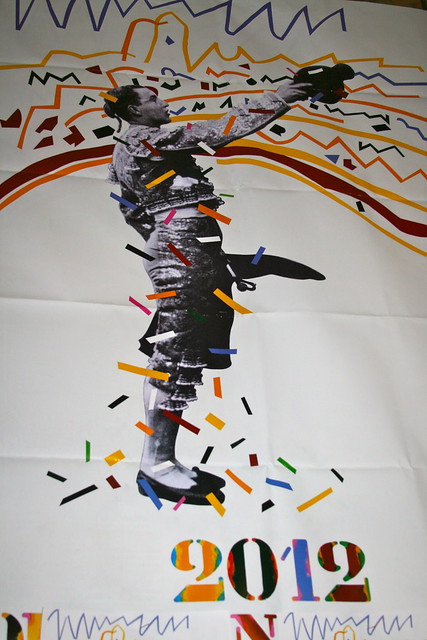 And plenty of religious iconography. 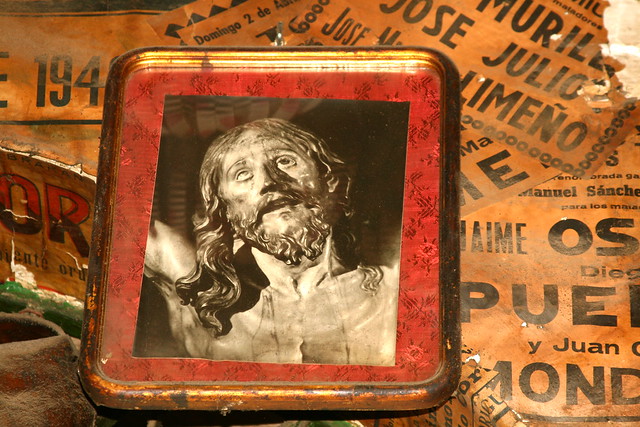 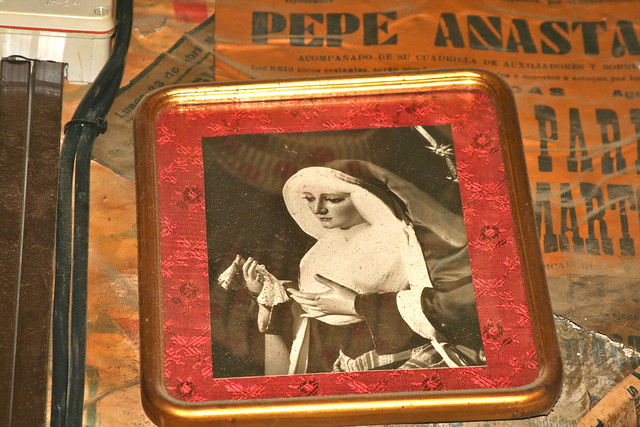 And of course we ate the local cuisine… 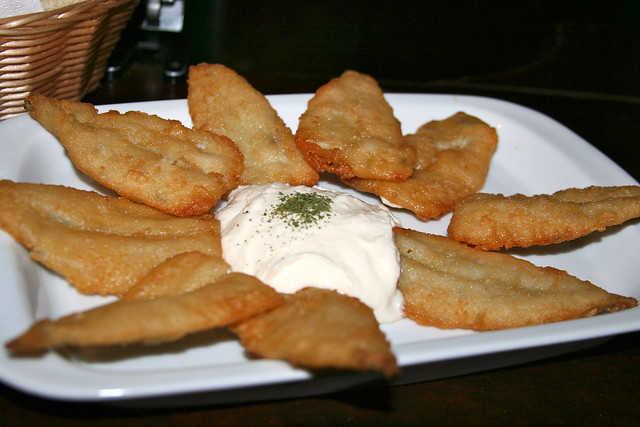 These were a kind of fried anchovies — kind of like calamari, only different. And out of this world! 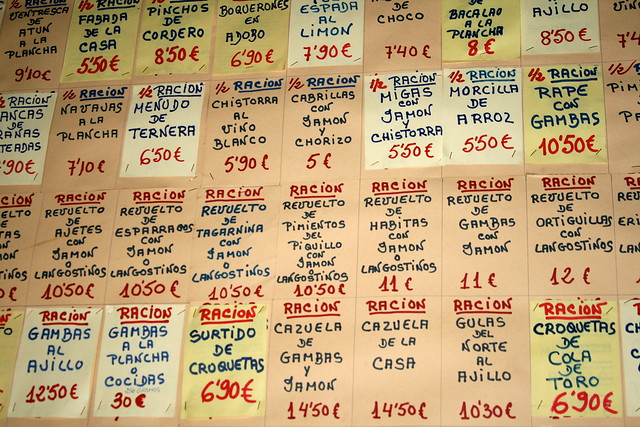 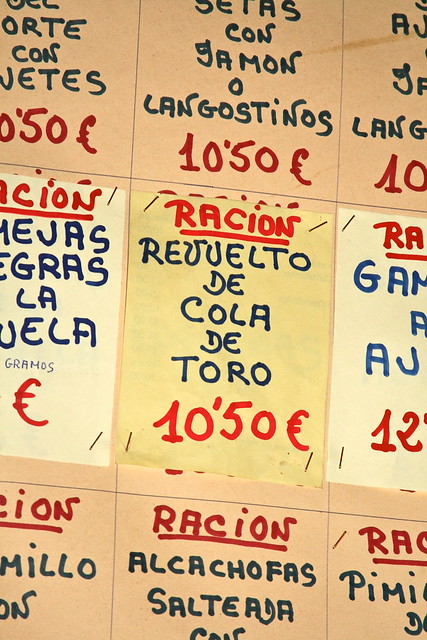 We made fast friends with our bartender, Miguel.

He reminded us of George Clooney, so we called him George. Which made him laugh and blush. 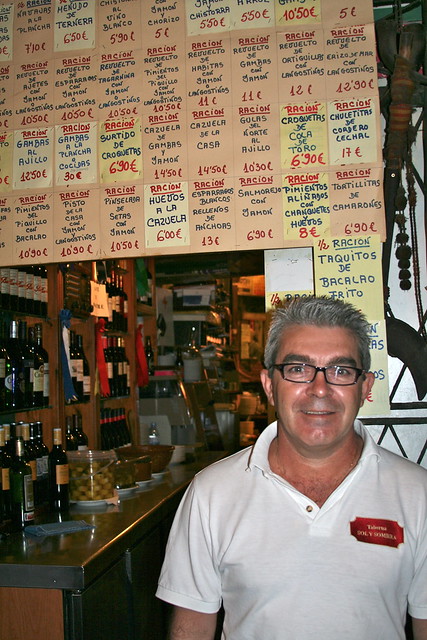 We went to Sol y Sombra at least four or five times, in the span of a 3-day stay. And every time we walked in, we'd yell out, “George!” as soon as we saw Miguel. We'd shake hands and hug each other and then we'd stand at his part of the bar the whole time so we could chat in our broken English-Spanish.

When it was time to leave Sevilla, we were very sad to leave George.

We had our last meal at Sol y Sombra.

I had the menudo for breakfast, which is a traditional stew made from the stomach of a cow. I love menudo. Don't knock it 'till you've tried it.

This was, hands down, the best menudo I've ever had!

My advice to you — when you go to Spain, don't skip the menudo. And if you're ever in Sevilla, make your way to Sol y Sombra. Tell Miguel (George) we said Hola!

Stay tuned for the next installment — Sevilla Part 2. (Yes, there will be more tapas!)

28 thoughts on “Our Trip to Spain and Portugal: Sevilla Part 1”