Our first night in Lisbon, we were exhausted from jet lag. We checked into the Sheraton (paid for entirely with points — thank you Starwood AMEX; this is why I love you). We promptly booked a dinner reservation with the concierge.

We had a drink and a snack (calamari) in the lobby, then went upstairs and immediately took a long nap. I woke up in a black fog, the concierge on the phone, telling me we had to leave in 30 minutes for dinner.

We ate at a romantic little place on a quiet street. 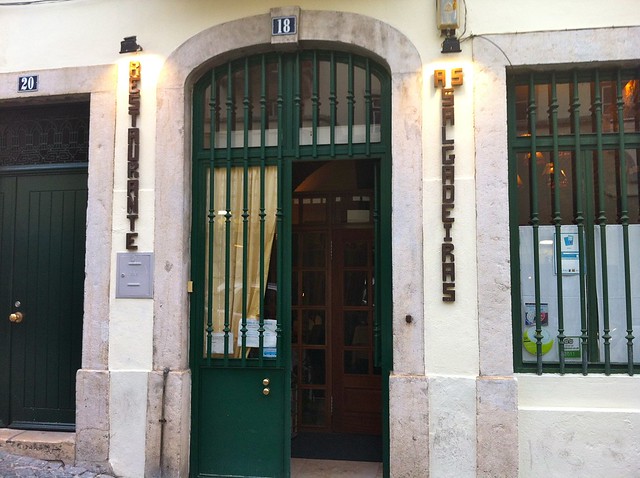 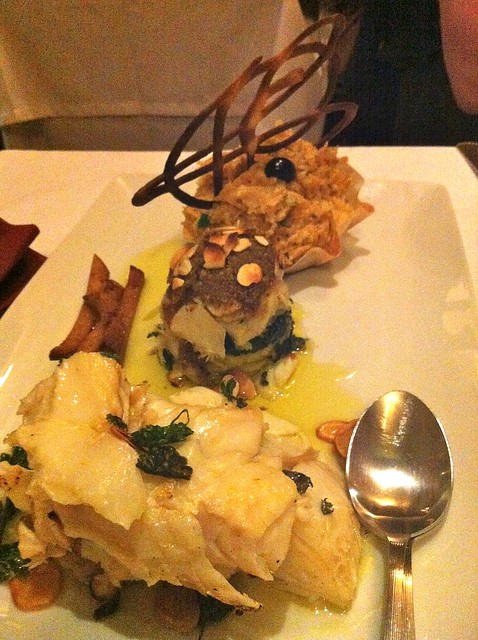 And we had a great bottle of Portuguese red wine. 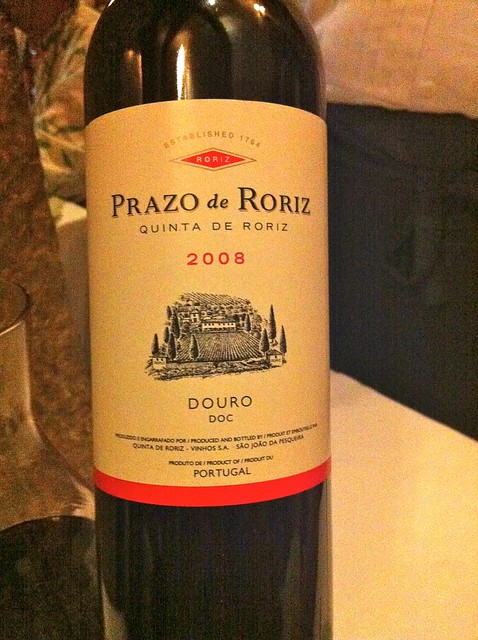 The next day, we stayed in bed, ate breakfast downstairs in the Sheraton lobby (coffee and a Portuguese pastry, Pastel de Nata), and then lounged around all day, sleeping and resting and just generally doing nothing.

That evening, we headed out to another restaurant. Sleep, lounge around, eat, drink, and sleep and then lounge some more. Exactly what I had in mind for this vacation.

Let me tell you something. If you go to Lisbon, especially when it's warm outside, take a cab. We walked, thinking we'd be all healthy, and you know, sightsee, and work up an appetite. Bad idea.

You see, the streets in Lisbon are super confusing. Winding this way and that, and there are no street signs anywhere. And I really think that whoever invented the Stair Master came up with it in Lisbon. They have some hills!

And you have this crappy map from the hotel that you can hardly read because the print is so small and you end up feeling like you're 150 years old because you're panting from the heat and your heart is pounding from the Stair Master hills and you can't read the effing map with the tiny print.

And did I mention that there are no street signs everywhere? (OK, yes, they have street signs, but unless you're a local, they're very hard to follow.)

Here's one of their cable cars, which seem to run only intermittently: 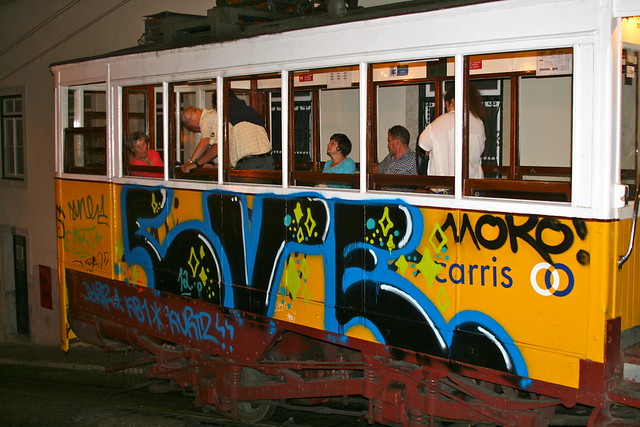 Bottom line, take a cab. They are cheap in Lisbon. Walk around a museum or a park. Don't walk to try to actually get somewhere.

So anyway, that night, when we trudged up hills and were 30 minutes late to our dinner reservation (because it took forever to walk and we couldn't find it on the map), we were greeted with this: 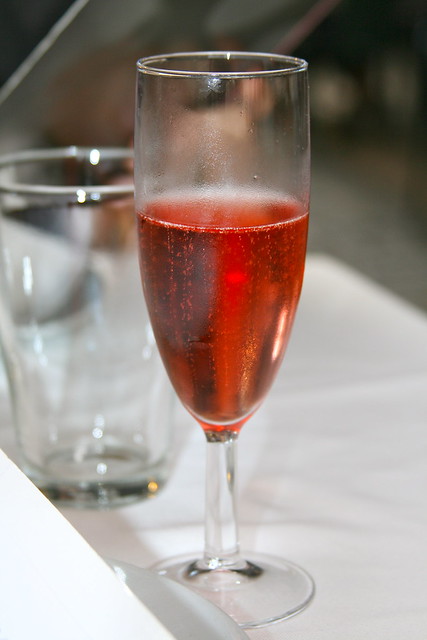 Yummy ice cold, sparkling wine. So refreshing! And just what the doctor ordered.

We ate outside, in the cool air. In a little alleyway. 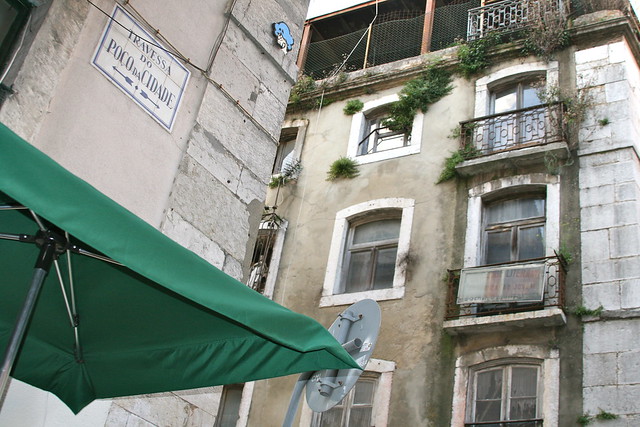 This was my view looking up from our table. 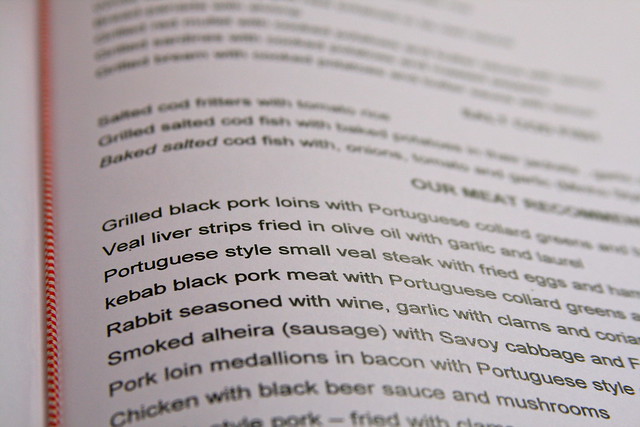 An interesting tidbit — in Portugal they charge you for everything, including the bread and butter and cheese and olives you have before the meal. They are not free like they are in most countries. 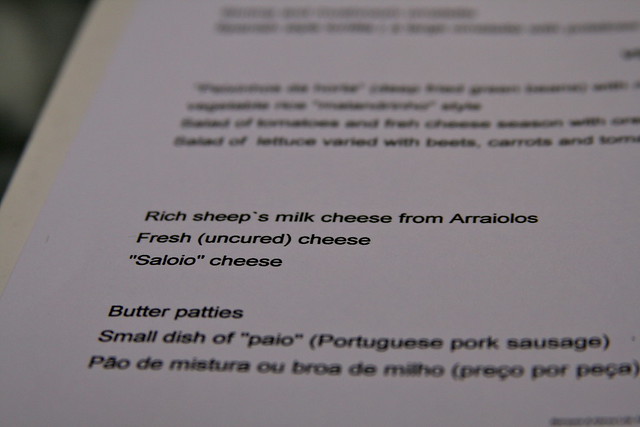 That said, it's still very inexpensive to eat in Portugal, so you don't really mind paying for these things. 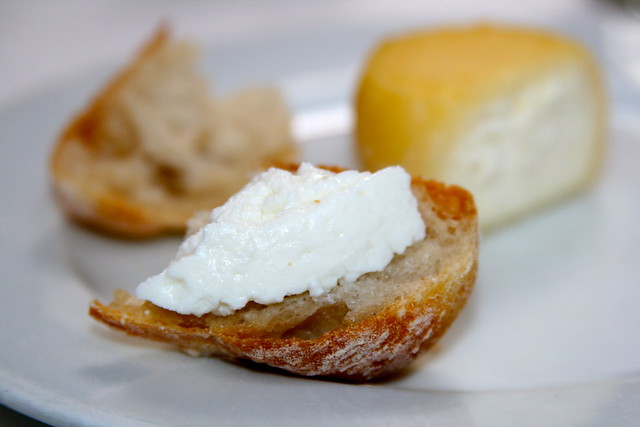 I got some bread and this delicious farmer's cheese. It was not raw milk cheese — it was pasteurized, but it was very delicious. 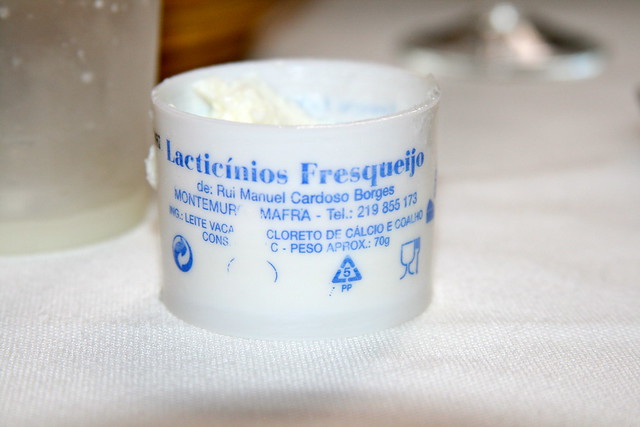 I did love that all the cheese we had in Portugal was local. They were very proud of their regional cheese — and rightly so. It was amazing. At a fraction of the cost of cheese from France or Italy. 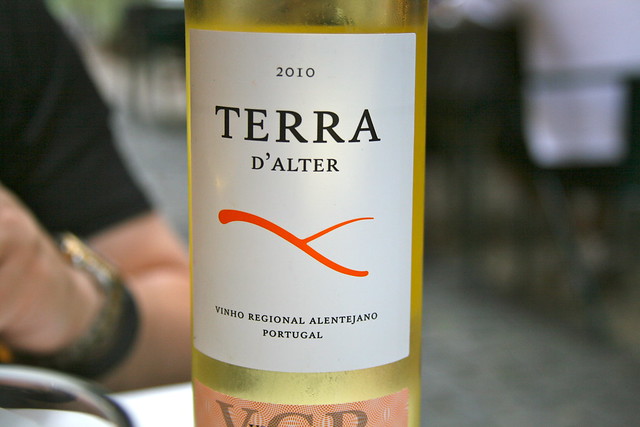 As fabulous as their cheese is, their wine is just as good — or even better. And cheap!

Depending on what city we were in, we paid anywhere from oh I don't know, maybe $7-30 for a bottle of wine in Portugal. Yes, in restaurants.

And the wine was absolutely phenomenal. You'd pay $30-100 for a similar bottle of wine in America. Even with the exchange rate, we still came out way ahead.

Cheap and fabulous wine? I'm in heaven. Can I pack up and move here? 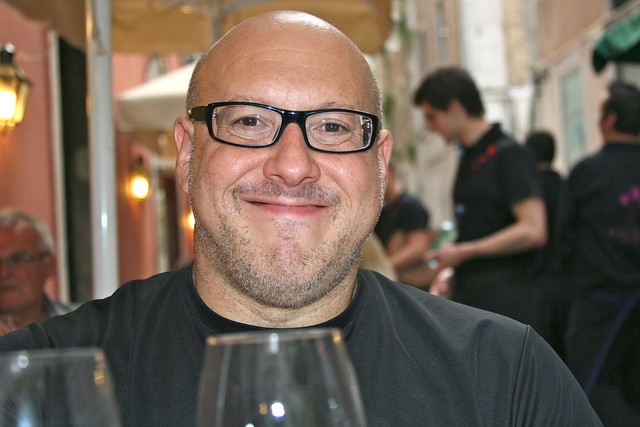 This is Seth, feeling very relaxed and glad to be drinking wine and eating olives, bread, butter and cheese instead of trudging up those &^@%$#(* hills in the heat. 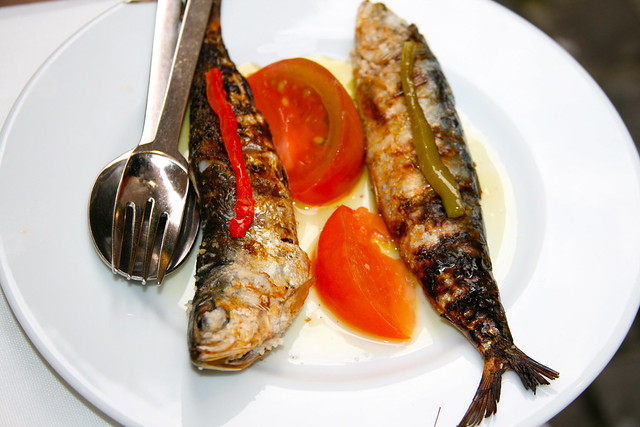 O.M.G. These were AMAZING! We ate all of them, heads and tails and all. The bones are small enough, and cooked through, so they just break up in your mouth.

I know, it sounds a little weird, eating fish bones.

Trust me. They were SO delicious. And when in Rome…

Let me tell you my favorite part of the sardines: the heads. When you bit into the heads, you got an explosion of salt. I am wondering if it's because the thyroid gland is contained in the head. Where iodine is stored.

I don't know, who knows? It was so ridiculously good. 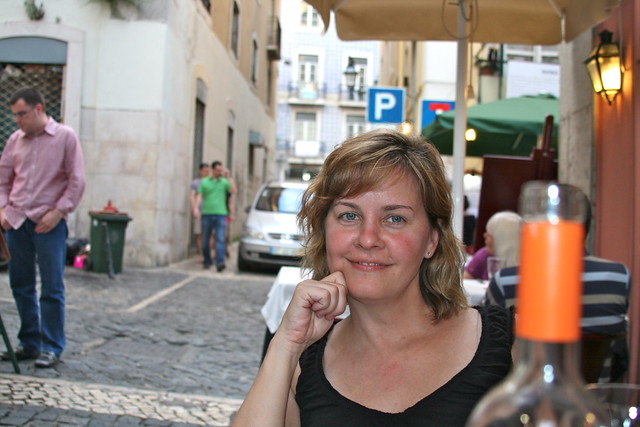 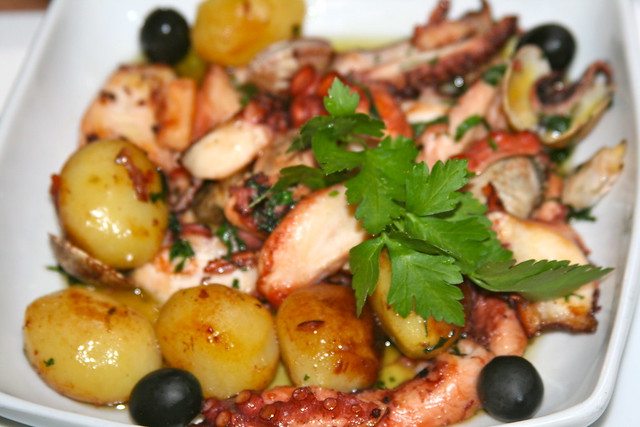 Seth had some kind of mixed seafood dish. 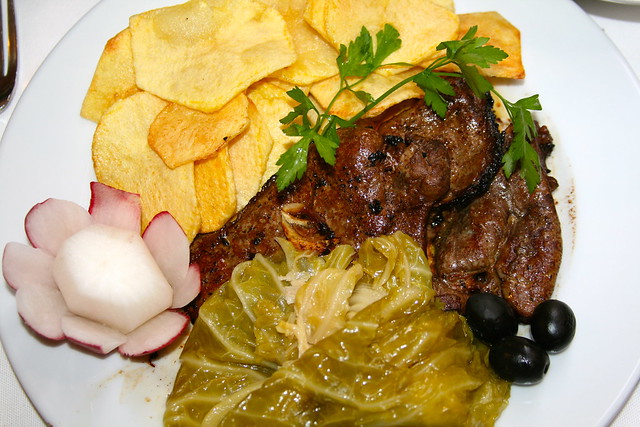 I had the calves liver with braised cabbage and potato chips.

When I ordered it, the waiter said, “This is what the locals eat. The old people who have been living in this neighborhood forever.” Of course, then I had to have it.

I always order the liver if I think it's going to be good, and I was not wrong on this occasion.

I think I ended up eating liver or other organ meats 6 times on this 2-week vacation. I had foie gras three times, plus this calves liver, plus I had menudo in Spain.

Organ meats are just so much easier to find on European menus. We Americans are such wusses with our love for boneless, skinless chicken breasts. 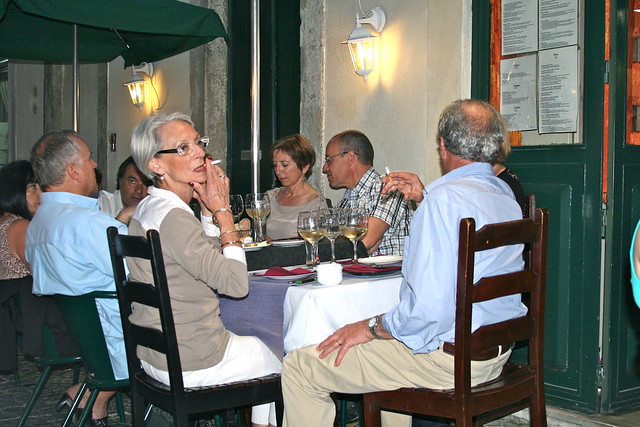 These were some French people sitting across from us. Smoking in between every course. (How do the French stay so healthy eating so many carbs and smoking and drinking like sailors? That is a whole ‘nother post.)

We did not run into a lot of Americans in Lisbon. Mostly French and British people.

Did we have dessert? Yes, I think so, but I don't remember. And I don't seem to have a photo. Maybe we didn't. 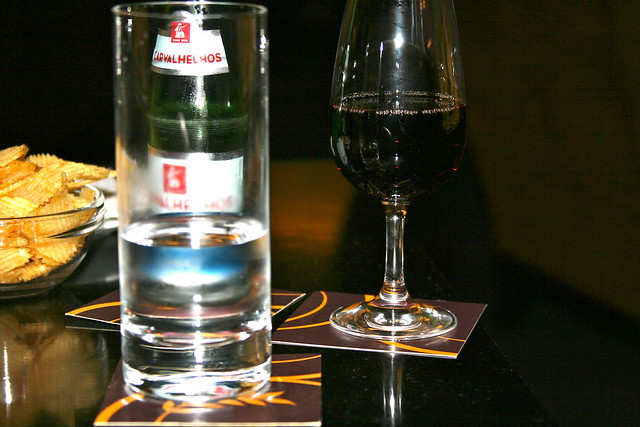 We walked back to the hotel and sat in the lobby in their plush chairs in air conditioning and drank Port and ate potato chips and peanuts. Not like we needed any more food.

Stay tuned for my next post as we travel to The Algarve, Porgutal, the southern coast rife with beaches, sunshine and seafood.