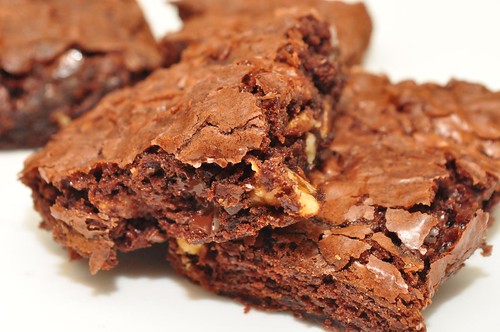 Brownies, the quintessential American dessert. You can make them much healthier by using pastured eggs, grass-fed butter, sprouted flour — so much better for you than using factory farm eggs, vegetable oil and refined white flour.

If you're going to make brownies, make this healthier version. When you're craving a chocolately treat, these brownies are perfection.

I know you are going to love them!

This recipe was modified from the “All-American Fudge-Chunk Brownies” recipe in Richard Sax's fabulous and essential cookbook, Classic Home Desserts.

If you don't have this cookbook, order it now. The man is a genius.

1. Preheat the oven to 325 degrees F.
2. Lightly butter an 8-inch square baking pan. Set aside.
3. Melt the unsweetened chocolate, butter, and semi-sweet chocolate in a saucepan over low heat, stirring occasionally. Set aside.
4. Sift the sprouted flour (throw away the bran,) into a bowl. Add the pinch of salt and 2/3 tsp vital wheat gluten. Blend well and set aside.
5. In another bowl, beat the eggs with an electric mixer (or a whisk) for a few minutes, until frothy. Gradually beat in the sugar. Add the vanilla.
6. Fold in the melted chocolate. Fold in the flour/salt mixture and blend.
7. Pour the batter into the greased pan and smooth the top.
8. Bake until a toothpick comes out almost clean, about 25 minutes.
9. Place the pan on a wire rack or trivet and let cool completely. Do not cut until completely cool.