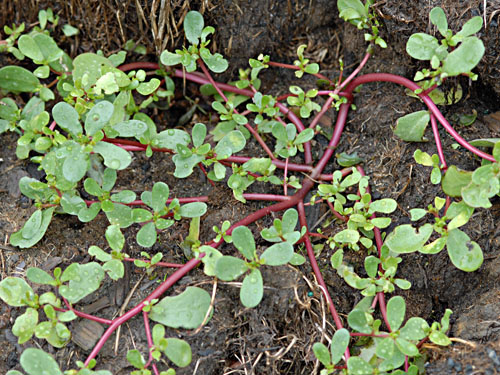 I was looking around the web for a recipe for purslane salad. I found purslane at the farmer's market on Saturday and we have not gotten around to eating it yet — I want to make a salad tonight before it goes bad. I'm also serving grilled salmon and artichokes with melted butter.

Anyway, I happened to come across this recipe, which I think looks really yummy!

Of course, I would not make the recipe this way — I would use whey and sea salt, just like we make Nourishing Traditions dill pickles. I think I will try it. They've got to be super-nutritious. I'll post my results and modified recipe.

(from Joy of Pickling, by Linda Ziedrich)

1.Pack the purslane stalks vertically in a pint jar, slipping the dill head and chile pepper down the
side. In a nonreactive saucepan, bring to a boil the vinegar, water, salt, garlic, and peppercorns, stirring to dissolve the pickling salt. Pour the hot liquid over the purslane. Cover the jar with a nonreactive cap.
2.Store the jar in the refrigerator for 1 week before eating the purslane. It will keep, refrigerated, for several months or longer. Yields 1 pint.