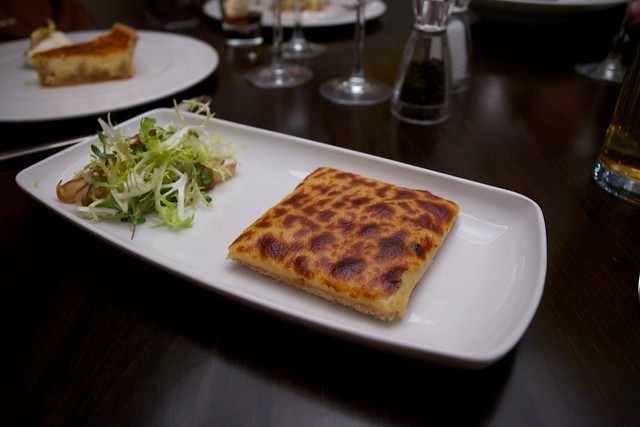 Everyone says British food is bad, but nothing could be further from the truth. Every time I've been to Great Britain, I've had delicious food, even in the pubs. It's especially funny to me that Americans complain about British food. I think we Americans have the worst food on the planet. If I never go to another T.G.I. Fridays or Applebee's, it will be too soon.

British pub food may not be the haute cuisine of neighboring France, but I love it. Granted, today in the pubs, they're using modern industrial foods like soybean oil for frying fish and chips whereas it used to be lamb tallow, but traditionally a pub was a place you could always get a hot, nourishing meal. (And there is the growing “Real Ale” movement in the U.K. — a push for unpasteurized beers and ales.)

Welsh Rabbit, or Rarebit, as most people know it, is essentially a sort of open-faced grilled cheese sandwich. If you say “rabbit,” instead of rarebit, most people will correct you. Unless they are Welsh (like my step-father), or into etymology and know better.

The original term was Rabbit, and was essentially an ethnic slur against the Welsh. “Rarebit” was the euphemism that people started using instead of saying “rabbit”.

1. Optional: Set the oven to broil.
2. Toast the bread.
3. Grate the cheese or run through food processor.
4. In a medium saucepan over low heat, melt the butter and whisk in the flour.
5. Whisk constantly for a few minutes, being careful not to brown the flour.
6. Whisk in mustard, optional Worcestershire sauce, salt, and pepper, until smooth.
7. Add optional beer and whisk to combine.
8. Pour in cream and whisk until well combined and smooth.
9. Add cheese a little at a time, stirring constantly, until cheese melts and sauce is smooth — about 5 minutes. Add optional cayenne to taste and add more salt and pepper if necessary.
10. Pour over toast.
11. Optional: Stick in the oven for a couple minutes, just until the cheese starts to bubble and begins to brown. You don't have to do this step but I think it really makes the dish.